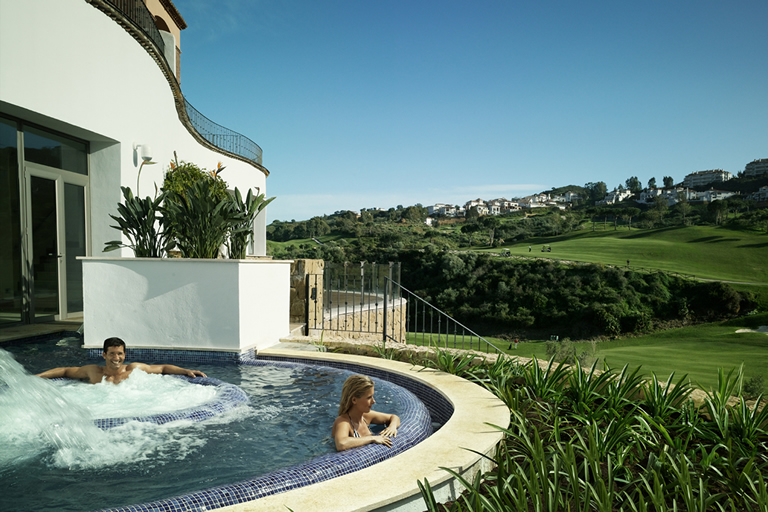 Benefits for golfers of using a spa

To prevent technical errors and bad body posture that may result at the very least in muscle discomfort, it is best to put yourself in the hands of a good golf teaching professional.

Controversy surrounds the origin of the word spa. According to some scholars of this subject, it comes from the Belgian town Spa, known for its thermal baths and excellent natural baths since Roman times, and as mentioned by Pliny the Elder in ‘Naturalis Historia’ in the first century of our age. According to another version, the term is actually the acronym SPA: salus per aquam or Sanitas per aquam (health through water), as this was a deeply rooted concept in Roman culture, which was famous for its hot springs.

Either way, the ancient Roman & Arab baths have been transformed today into modern spas, those establishments where water works wonders on the body and mind. And it is precisely these two elements that come into play in a sport as complicated and enjoyable as golf.
The benefits provided to anyone by a spa are numerous and irrefutable. Pools, hot tubs, whirlpools, water jets, sauna, steam …, all forms contribute to the physical and mental wellbeing.

Although it could be applied generally to all people, spas have additional benefits to golfers, who, by the very nature of the sport, are forced to adopt awkward postures and make sudden rotations. The repetition of movements always on the same side of the body generates imbalances in the muscle groups. The abruptness of one’s own impact against the ball and the vibration it generates pose a risk to the entire musculoskeletal system. Most injuries in the golf world are caused by overloads affecting especially the shoulder, elbow, wrist, lower back and knees.

Not swinging properly, using equipment that is not adapted to the characteristics of the golfer and not warming up sufficiently are all very important factors in the development of muscle ailments that could eventually result in injury if not treated in time.

[Tweet “To prevent technical errors and bad body posture that may result at the very least in muscle discomfort, it is best to put yourself in the hands of a good golf teaching professional.”]

To prevent technical errors and bad body posture that at the very least, can lead to muscle discomfort, it is best to put yourself in the hands of a good golf teaching professional.
But to eliminate the stress of the game of golf and muscle tension that arises from playing the game, there is nothing better than a spa with hydrotherapy and, if you have that option, a good relaxing massage.

Pythagoras recommended that his disciples use plenty of cold baths to fortify the body and talent. Hippocrates, the father of medicine, also commended the healthy properties of the baths, to which were added rubs or massages. We are not in ancient Greece and nowadays it is very easy to heat large volumes of water and enjoy the pleasures of hot baths.

The spa provides benefits derived from three simple principles that affect the body: heat, buoyancy and hydro massage.
Hot water causes the muscles to relax and has anti-inflammatory and sedative effects. Furthermore, the sensitivity of the central nervous system relaxes, as the body focuses on the heat gain, and this also increases general body wellness. The treatments one gets in a spa allow the person to be secluded from the outside world, forgetting the stress and focusing on their own body. By relaxing the body, the mind also relaxes and psychic discomfort disappears.

Knees, elbows, feet, ankles … these joints constantly come into play during the golf game and are forced to endure great stress. Who has not experienced or knows someone who has suffered joint pain from time to time? When sitting in a spa, the natural buoyancy of water ‘reduces’ body weight by 90 per cent. This obviously reduces the stress on the joints, giving them a deserved break in their daily routine. While you relax in the hot tub, the pressure is greatly reduced in all muscles and joints.

Anyone who has felt the effect of water and air forcibly projected on the body in a spa will have seen its obvious benefits, both physically and relative to counteract stress. The best part of this therapeutic massage is that you can control it at will depending on the intensity you want to feel and the part of the body where you want to apply the pressure.

[Tweet “As we have seen, spas are great allies for golfers … and the best place to remember… alone or in company, the great shots that were made on the course “]