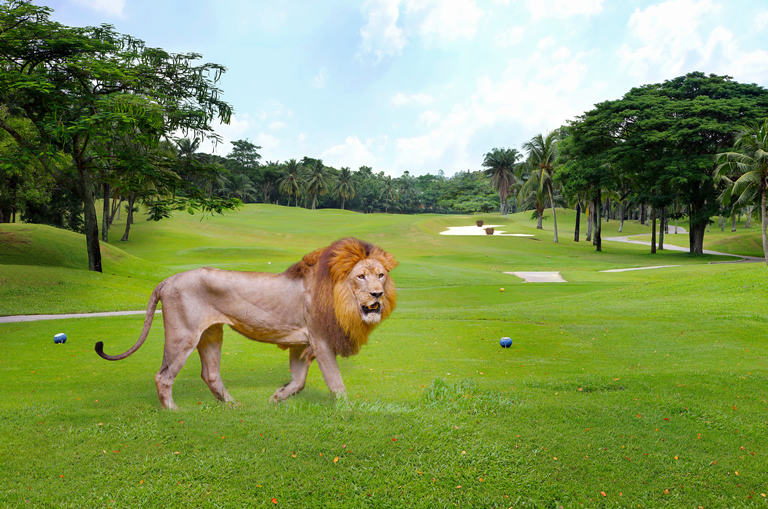 The most dangerous golf courses in the world

Floods have carried sharks to a lake at a course in Australia, which takes advantage of this peculiar visitor as a tourist attraction

There are many more dangerous situations, apart from hitting another player with your golf ball. For example, let’s have a look at the golf course which Sports Illustrated has dubbed “the most dangerous place in the world”. This is the Bonifas Course and it is situated just 400 meters south of the demilitarized zone between the two Koreas, in Panmunjom.

This is a unique golf course as it only has one hole, a par 3 of 175 meters, just for the enjoyment of the United Nations Command (UNC) stationed there, and which consists of a few hundred military personnel.

The danger with this peculiar short course, whose name honours an American captain killed by North Korean soldiers when a tree was removed which blocked the vision of two observation posts, does not lie in the threat of a North Korean attack in the event that President Kim Jong-un may wake up in a bad mood one morning … but by the amount of land mines which are situated around the golf course.

“Danger! Do not attempt to retrieve balls from the rough. Active Mines” Players who risk venturing around the golf course know exactly what the risks are. Do not expect to find perfectly presented and well maintained grass, although the green is always a lovely emerald colour, not thanks to the green keeper, but because it is artificial lawn.

A watch tower with a machine gun stands guard over the course, presumably to repel a possible attack on the base, and not to intimidate golfers causing a delay due to slow play.

On the score card of the North Star Golf Club of Alaska, they mention to their relationship with local animals, which can also include bears

Although not officially confirmed, it is said that at least one mine from those surrounding the course, has been detonated by a golf ball, caused by a wayward shot.

Powerful jaws
Apart from this ‘explosive’ golf course, there are others too, where the danger has paws, claws and powerful jaws. Florida, where alligators thrive, is well known for the presence or incursion of these dangerous animals. Most recently from this area, and which received global media coverage was when a specimen of about five meters walked between the holes at the Buffalo Creek course, located in the town of Palmetto.
Of course, golfers who play in the American state are accustomed to seeing such large reptiles, although possible not as large as this one was. In fact, the largest alligator captured in the region measured 4.8 meters. It is estimated that in the area of the Everglades, at the south eastern tip of Florida alone, there are more than a million alligators.

Lion attack
If you need to tread carefully when approaching the lakes in Florida to play a ball, at the Skukuza Golf Course in South Africa you won’t get any unexpected surprises from the water as the danger does not come from the water, but is found on land.
Nestled within the Kruger National Park, golfers can see a variety of animals during their round of golf, and the animals generally stay a safe distance away.
On its website, the golf course warns players that the course is not fenced and that players may encounter unexpected four-legged viewers, and quote, “to name a few”: hippos, impalas and baboons. Among these, lions are also mentioned like the time that a lion killed a buffalo on the first green, seen together with hyenas and other unfriendly animals. Until now, there is no report of a player being attacked.

Sharks lurking
Another very interesting course, due to its location is the Australian Carbrook Club, which for some years since some flooding, has had a few sharks now living in the lakes which surround the golf course. Before the arrival of the sharks, which over time have seen their population increase, children used to earn extra money by going into the lakes to retrieve lost golf balls. That business is obviously over now. But as something good can also come from something bad, the sharks have now become a tourist attraction in the área, and each month the golf club holds a competition called the “Challenge of the Lake of Sharks”.

Alaskan bears
The northernmost golf course in America, the North Star Golf Club in Alaska, is also entertaining for wildlife lovers. The scorecard includes a section called Animal Scorecard, with a list of animals that can be seen during the round., such as Coyotes, eagles, squirrels, elk, bears and “new species”. A local rule states that if a raven or a fox steals your ball, then you can replace it without penalty, “at the scene of the crime”. The rules do not say what to do if you are approached by a bear, but certainly there is no need to say anything, just run!