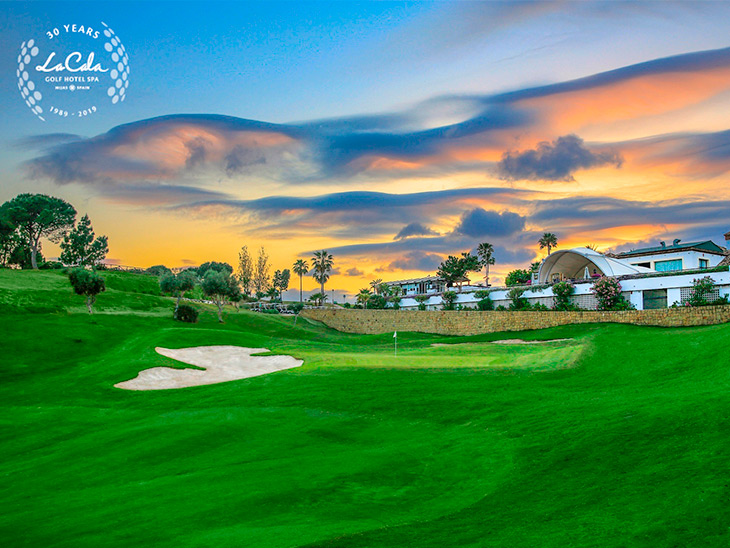 Situated in the foothills of the beautiful Mijas Mountains with breath-taking views of the stunning Andalusian countryside, the idyllic retreat at La Cala Resort, which celebrates its 30th anniversary in 2019, feels a world away from the hustle and bustle of the coast even though it lies just 20 minutes from Marbella and 30 minutes from Malaga airport.

Thirty years on from its opening, Irish-owned La Cala Resort, part of the FBD Hotels and Resorts portfolio along with the Sunset Beach Club in Benalmadena half an hour away, now boasts three superb championship courses – Campo America, Campo Asia and Campo Europa. All three were designed by famous golf course architect, Cabell Robinson, with each 18-hole layout created to ensure a truly exhilarating golfing experience. Campo Asia was the first to open in 1989 with Campo America arriving two years later and Campo Europa a further 14 years down the line in 2005. All three courses serve up some of the most exhilarating golf you will ever play blessed with spectacular mountain backdrops.

This year is a very special one for La Cala Resort, with 2019 representing the 30th anniversary of Campo Asia opening for play. Since that first day in 1989, La Cala has grown into one of the largest and finest golf resorts on the continent with its ever-growing range of services and an expanding property portfolio attracting many loyal clients who return time and again to enjoy all that it has to offer. This landmark 30th birthday year is set to be marked in fitting style via a number of celebratory events all proudly bearing La Cala Resort’s specially created 30th anniversary logo.

On May 4th, La Cala Resort played host to a 30th anniversary jazz day as part of the build-up to the major summer celebrations planned for July 12th. This mid-summer day will see a grand 30th anniversary tournament to which a host of local clients will be invited, followed by a 30th anniversary event that will run on long into the night at the resort. Further special events are being planned for the annual International Golf Travel Market (IGTM) in Marrakech. IGTM is the world’s premier global event for golf tourism suppliers, buyers and media, and has been operating successfully for 22 years.

When Robinson first set eyes on the plot in the late 1980s with a view to creating the first of the three courses he knew he faced a unique challenge for his very first solo course design project: “At first, I thought the terrain was at the limit of what could be turned into golf courses, given the severe changes in altitude. I remember looking at the whole estate and thinking, ‘I hope I know what I’m doing’. We ended up moving 500,000 cubic metres of earth, almost four times the amount that would be moved in flatter projects. Without wishing to sound arrogant, I’m still very proud of the work at La Cala.”

Robinson is right to be proud, for since he first moved earth in the late 1980s, La Cala Resort has gone from strength to strength. Not only does it now boast 54 holes of excellent golf, but also accommodation of the highest standard, including a newly renovated 107-bedroom hotel and a selection of on-site properties for sale and rental. These range from attractive two-bedroom apartments to opulent five-bedroom villas spread throughout a vast estate of approximately four million square metres. Future plans in association with Taylor Wimpey Espana include ‘Natura’, an exclusive development of 40 three-bedroom golf-front townhouses in a prime location within La Cala Resort, and ‘Sun Valley’, the first phase of which will deliver 23 magnificent penthouses and apartments with spacious terraces and fantastic golf course vistas.

Resort residents can enjoy the luxurious spa plus a selection of excellent restaurants and bars, while the clubhouse offers a well-stocked pro shop and another fine restaurant looking out over Campo Asia. There are also further leisure opportunities with a FIFA-standard football pitch, running circuit, gym, tennis and squash courts. The resort offers a good transfer service from both Malaga airport and the coastal towns on the Costa del Sol.

Nestled between the arresting beauty of the Sierra de Mijas Natural Park and the shimmering Mediterranean Sea, La Cala is a genuine haven of tranquillity. It’s the perfect base for exploring Andalusia and Spain’s fascinating cultural cities like Granada, Seville and Malaga. The famous coastal city of Marbella is only 20 minutes away, while other popular Costa del Sol seaside towns such as Fuengirola and Estepona lie within easy reach.