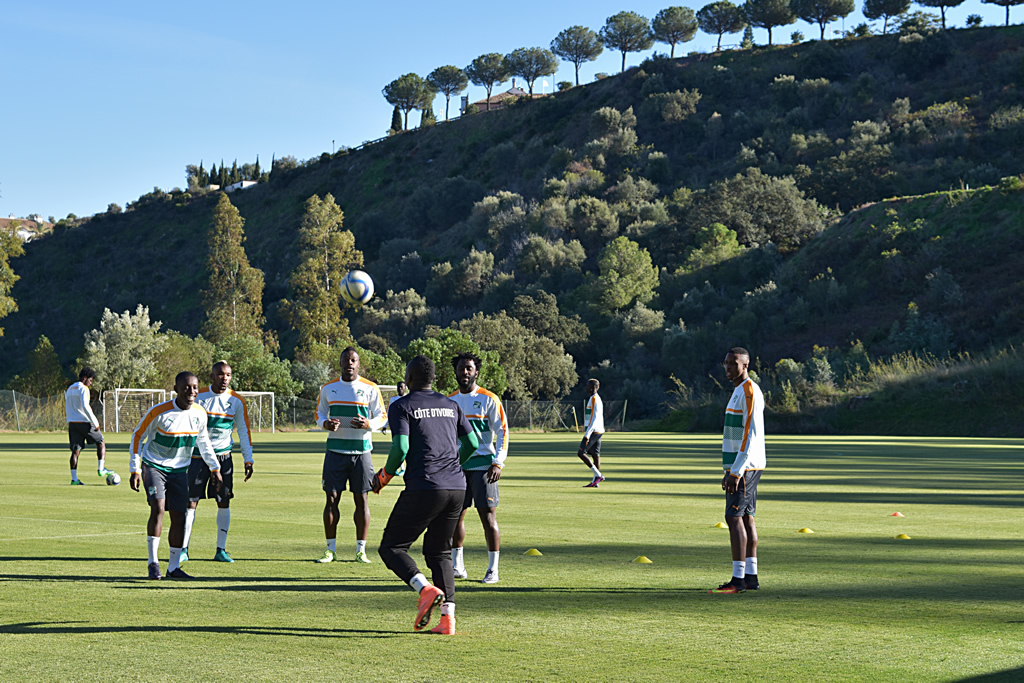 For five days, famous professional footballers such as Keita Mamadou, Ibrahima Cisse, Wilfried Bony (who have all played various seasons in the first division of the English league) made the most of the wonderful football pitch and facilities by training hard for the friendly against their tough European rival, the French team. Knowing that the match would take place on European soil, the managers of ‘Les Éléphants‘ (The Elephants) chose to have the players train in a first class, intimate and peaceful environment.

The 23 professional footballers who currently make up the team, accompanied by trainers and the coaching team, chose La Cala Resort due to the quality of its sports facilities and its pitch which meets FIFA’s official dimension requirements.

During their stay, they could also benefit from a wide range of complementary sports services: three 18-hole golf courses, running circuits, squash and tennis courts. The hotel has a tranquil setting, surrounded by nature with sea views of the Mediterranean. It has a large 1300m² modern spa with excellent treatments. The Costa del Sol has a pleasant climate, with an average of 20 degrees maximum in November and the resort is in a fabulous location, no more than 40 minutes away from the international airport Malaga-Costa del Sol. All of these are services which are most appreciated by elite clubs. Season in season out, these services attract the interest of several first class professional teams for player’s meetings in the complex.

On several occasions La Cala Resort has turned into the venue for first class professional teams’ player’s meetings from the footballing world. Throughout its recent history, more than 70 teams from all five continents have scheduled their pre-match meetings here. Amongst them are international teams such as Borussia Mönchenladbach (Germany), R.S.C Anderlecht (Belgium), Al Alhi Dubai F.C. (Dubai), FC Porto (Portugal), Legia Warsaw (Poland), AC Sparta Prague (Czech Republic) and national under-18 and under-20 football teams from the USA, Leicester City, Rochdale and Everton (from the United Kingdom), FC Dynamo Moscow (Russia) and FC Lausanne-Sport (Switzerland).

Described as “idyllic” by sports professionals, La Cala Resort’s facilities are also the venue for several national teams’ pre-match meeting days. Last July, the members of Cádiz FC spent a period of six days there after their promotion to the Second Division of the Liga Española. Previously, premier league teams like Málaga CF and Sevilla Atlético have also stayed there.